Roughage in the rearing period 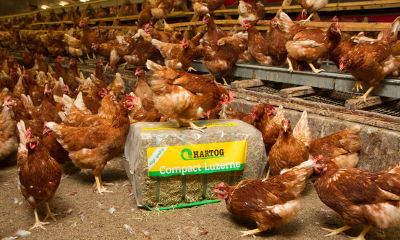 Good agreements between the breeding company and the laying company are therefore essential. Only when regular Compact Lucerne is available during the breeding season, the hens naturally teach forage behavior. As a result, there is a chance that in a later period the hens will absorb too much roughage, reduce the absorption of concentrate and disrupt the energy balance. The provision of roughage is not only suitable for the organic sector, but the common sector also benefits from healthy laying hens. Lucerne already has an influence on the development of a healthy muscle stomach and healthy intestines at an early stage. A better developed muscle stomach is more beneficial for laying hens, especially to prevent malnutrition when it comes to laying. Malnutrition can lead to problems such as poor production and liver fatigue.

There are a number of periods in the rearing in which the risk of feather picking increases. These are the first four weeks in the upbringing, the rupee periods and the periods in which the amount of (day) light increases. It is therefore possible to offer the Compact Lucerne in the first few weeks on the chick paper on the grids. During the ruining periods the hens are sloppy in the plumage, which causes fake peaks to be provoked earlier. Long days with a lot of light pose a risk because in hen after an hour or 8 scars a day hurts. In this case, a combination of Compact Luzerne with other distraction is recommended.

The Compact Lucerne not only delivers distraction to the hens but also provides a physical necessity, namely fiber rich feed. The fibers stimulate the functioning of the stomach and intestines. Well-functioning ones are less sensitive to bowel inflammation.