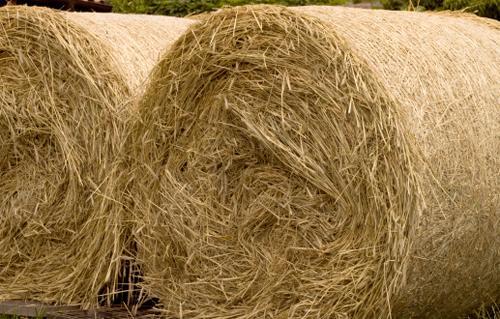 Hay consists mainly of dried grass, but other plants may also be used. The quality of the hay can be estimated using the odor, color and composition:

At the end of June or early July, mowing's mainly started. The grass must be bloomed, as the grass passes through, and ares (seed formation) enter, it is allowed to be mowed. The exact moment depends on different circumstances. The best is to cure with sunny, windy and dry weather as when it is wet, fungus might arise. These fungi might cause toxins such as mycotoxins in the hay. The hay then gets an unspent odor and the horses may get allergies.

After mowing, the grass must dry two to three days, shaking it with a so-called shaker. It is customary to harvest two cuts per season, the first one around the end of June and the second in August. The grass is dry enough when it has a dry matter (ds) content of more than 80%, thus avoiding hay and fungus. Then, the grass will be wiped so that it will lie in long rows.

Hay is usually squeezed in bale, stuck with ropes and stored in a haycake. To maintain the quality it is important that the room is dry and ventilated. Insufficient ventilation and drought might lead to hatching, the temperature may even rise so that it flies into the fire.