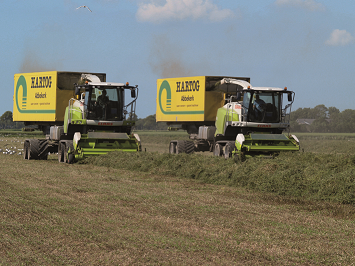 Damage to the grassland causes bare spots where weeds will grow. Therefore, when servicing a pasture, note the following points:

Drag the pastures if they are not in use in winter, so that the manure is evenly distributed. If the manure is evenly spread throughout the country after the first time, once is enough. Do not sleep in warmer weather, as you spread the larvae and eggs and increase the worm problem. In spring, trailing with iron points (vertically) can help remove young weeds and get air into the ground.

It is also advisable to roll your pastures in spring with a heavy metal or concrete roll behind the tractor. With the roller you can straighten grasses and clear the holes in the country.

In addition to the contamination of horses by worms, the growth of forests prevents the manure from getting out of the pasture. Forests consist of unwanted plants that grow at the places where manure is planted. On and around the places where the manure is located, the horses do not eat the grass anymore, also called horse lanes. Particularly on small pieces of plot daily manure is the best, but twice a week can also. By grazing in combination with goats or sheep, the pasture is evenly buried, goats and sheep are grazing the forests.

In meadows that are not very pruned, it is not necessary to remove the horse horse. The worm contamination is not so high and in a natural whey the nutrients are available to the grassland by the manurees that eat and digest the manure.

Moles must be combated as quickly as possible, which can damage in young grassland such as soil sagging. Molluscs also choked the soaked grass, resulting in bare spots. Molshopping is also detrimental to harvest, the harvesting machine creates the sand, which reduces the quality of the harvest.

To maintain the grassland, fertilize so that the right nutrients come into the grass. Read more about Fertilizing the grassland .

Weed problems in grassland can usually be avoided by good care, good use and good maintenance of the grassland. Unwanted grasses are a problem when:

Fighting the weeds can happen with the hands when they occur only locally in the meadow or when it comes to small plots. However, chemical control will usually be necessary. Weeds can be chemically controlled by spraying with growths. You can use MCPA and MCPP for combat including herder bag, clover, daisy, weegbree, butterflies and dandelion, it is for sale at various agricultural cooperatives.

For most weeds, a spray in the spring shortly before bloom is a good time. In summer, a control is also possible, provided that the plants have enough leaf to absorb the drug. However, there is a disadvantage of chemical control, up to a week after spraying with growth, the plot may not be weed or mowed.