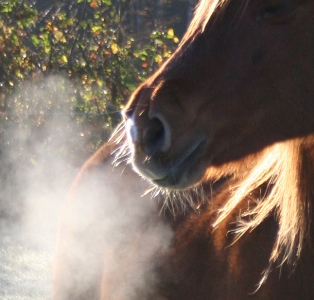 A damp horse is recognized by poor endurance due to decreased lung function. Often, vigorous horses have severe pumping respiratory movements and often cough through irritated throat and respiratory tracts. At times, nasal discharges result in an excessive amount of mucus being let out through the nose.

In the case of untreated asthma in horses, chronic obstructive airway congestion may occur. There is an ever-increasing inflammatory reaction and the dried mucus forms as it were where the air can no longer pass.

The lungs behind the clogging are broken. There is air between the vesicles, rather than in the lungs. If this phenomenon lasts longer, irreparable damage has been caused. The horse is vaporous.

Warning your vet in a timely manner can be important to prevent your horse from getting vaporized. A neglect of chronic or asthmatic bronchitis in horses can cause vomiting.

The real steamy horses have emphysema and that is no longer possible to treat. If many lungs are broken, the function of the lungs become significantly lower. Captured lung blisters never recover. In order to alleviate the complaints, medicines can be used, where often very tough mucus is adressed.