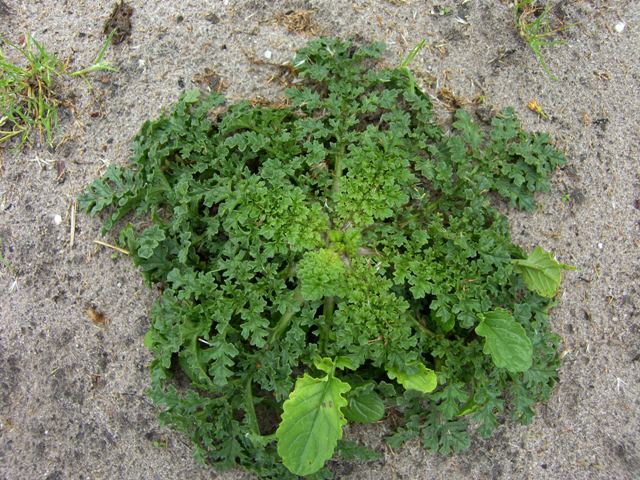 To prevent Jacobaea vulgaris in the feed of cattle and horses, it is important to recognize the plant and distinguish it from other yellow flowering plants.

RIKILT, part of Wageningen UR, has developed a program that identifies yellow flowering plants by giving answers to a number of questions. The program also allows plants to be compared, and can be scrolled through the descriptions and photos. Visit the Rikilt website to download the computer program.

Do you want to have Jacobaea vulgaris in your pasture or do you want to recognize the plant better? By identifying all parts of the plant you can check if you are dealing with this poisonous herb or that it may be a different plant.

General
In the first year, the plant forms an unobtrusive rosette, which often causes young plants to be overlooked. In the second year most plants bloom, put seeds and die. The stem of Jacobaea vulgaris is usually a little purple in color. The "kale-like" lobed leaves of Jacobaea vulgaris are dark green and at the bottom are a bit witty in color. Where the plant does not bleed (e.g., by mowing or grazing), the plants are present in the vegetation as rosette.

The shape of the leaf can be elongated (left), oval (center) and round (right). The leaves of Jacobaea vulgaris and some relatives have an oval leaf blade along the outer edge, as seen in the second leaf (middle).

Number of leaves
The number of leaves of Jacobaea vulgaris leaf is one, as shown in the first example (left). The picture shows a view of three leaves (middle) per leaf and a lot of leaves per leaf (right).

Edge of the leaf disc or the leaves

The edge of the leaf disc or of the leaves can be described as follows:

Jacobaea vulgaris and some related species have single or double-leaf leaves, as shown in the third example (right)

Degree of incision of the leaf edge

Jacobaea vulgaris has spread standing leaves, as in the left-hand view. The right example shows a view of opposite leaves.

Placement of the leaves

Farmer's worm and Jacobaea vulgaris are quickly confused. The flowers are clearly different. 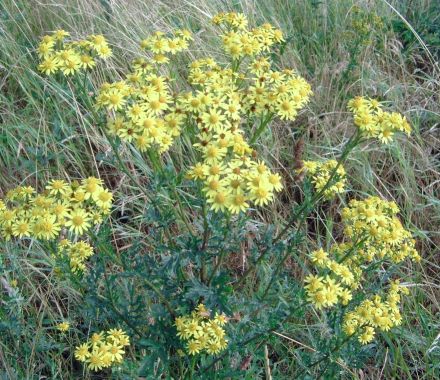 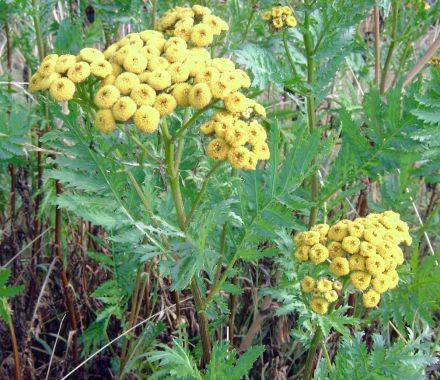 Spreading of the flowers

The flower heads that are attached to one stem of Jacobaea vulgaris have flower stems of different length so that the flower heads together form a screen (official term: tuil, see lower example). The top example shows irregularly distributed flowers.

The flowers of Jacobaea vulgaris have a flower heart, as can be seen in the left picture. The right example shows a flower without flower heart.

The flowers of Jacobaea vulgaris have petals. The left preview shows no petals. The middle example shows four petals and the right example gives a view of several petals.

Jacobaea vulgaris has a dark colored flower, as shown in the right example. However, the flower color depends on the location.

Hartog's healthy roughage is produced through controlled crops, making the products free from weeds, such as the poisonous Jacobaea vulgaris. After mowing the grass and / or luzerne are chopped and dried in a large drying drum at very high temperatures. Rapid drying keeps the freshness and taste of the product. Also, all bacteria, fungi and germs are destroyed, which makes our Lucerne-mix, Gras-mix and Compact Grass a definite added value to traditional roughage feeders, such as hay and (fore dry) grass.